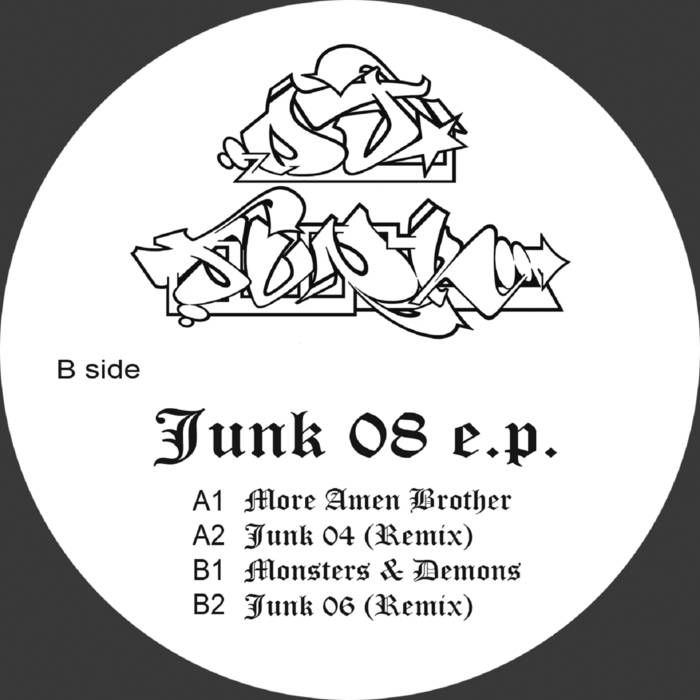 "Created during 1993 when the ‘Dark Jungle’ genre was at it’s height, the dominant sound at raves was heavy breaks, deep throbbing bass lines and crazy electronic noises. This sound caught my imagination and I got right into creating works of madness. Using an Akai S950 sampler and an Atari computer running Cubase sequencer software I had polished my break beat looping and chopping skills and wanted to show them off so I let rip on this EP, add to that some dark noises sampled from early Techno tracks and Electronica albums like Isao Tomita and the result is some extremely weird and dark jungle which captures the rave sound of this time.

Two tracks are remixes of tracks released on earlier records, Junk 04 and an untitled track from the Junk 06 EP, ‘Junk 06 Remix’ is a remix with the amen brother breakbeat and was cut on an acetate (dubplate) by LTJ Bukem.

Monsters and Demons, this is a re-work of a 1989 Techno track ‘Virtual’ By Black Dog, this was always a favourite of mine and I wanted to do a breakbeat remix although the original track is a very early form of jungle in my opinion. This was cut on acetate (dubplate) by LTJ Bukem and Grooverider.

More Amen Brother is a journey into demented noises and chopped up breakbeats, could be too extreme for some listeners but that was the aim with this track, to make something right on the edge of the dark jungle genre and it’s something that I’m proud of now."

JUNK06 Remix was restored from Mint Vinyl as masters lost, all other tracks taken from DAT Tape. All tracks Remastered by Bob Macc, Subvert Central Mastering.